#12. A Conversation with Jorge Gutierrez 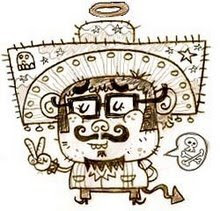 JA: Let's start with your time spent at Cal Arts, you were accepted in the Experimental Animation program while still considering Painting and Live Action; did you have any second thoughts about your major while enrolled, and what was your time in the program like?

JG: First of all, thank you Jason for asking me to do this. I'm really honored. Gracias!

On to the first answer, the great thing about Experimental Animation (which Jules Engel founded and ran at the time) was that it allowed and encouraged me to take classes from the other CalArts schools & programs, so I was able to take design & color, character design & storyboarding from the Character Aimation program, sculpting and painting from the Art School, and lighting, editing, and screenwriting from the Directing for Theater and Film school. I felt like I was like a little fat kid in the world's biggest candy store! I wanted to learn and do everything, and I kind of feel like I did; the doing, not the learning. I made so many student films! Most were terrible, so bad they would give you eye cancer if you saw them. I did abstract & narratives, comedies, dramas, 2D, 3D, stop motion, cut outs, sand, Flash, pixelation, anything you can think of. Even live action, which I really want to do again one day.

Looking back I sometimes think I should have concentrated more on the obvious fundamentals, like film theory, figure drawing, and perspective, and not done so much crazy work and partied so much. But the reality is that having done all those things made me the artist I am today. All that experimentation led me to, for good or bad, develop my own personal style. 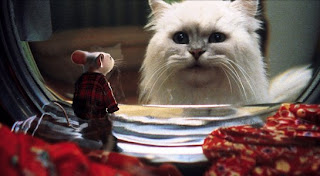 JA: Tell me about your internship working on Stuart Little, what was it like to be part of such a big project, yet be so creatively limited?

JG: A year before I graduated, I submitted my CalArts MFA thesis CG short, Carmelo, to the Television Academy and I won the student Emmy internship, which sent me to Sony to work as an intern on Stuart Little for the summer. The people there were super amazing and I learned a ton of stuff. It was my first taste of the real world.

Some very lucky and talented people are born to be character animators. I learned that I am not one of those people. It is a very specific skill and discipline and, like all the arts, not everyone can do it well enough to get paid for it. As an intern, I quickly learned that a character animator on a feature film has very little if any creative input on the two things I love the most in animation: Story & Design. So that was it, I decided I didn't want to be animator. 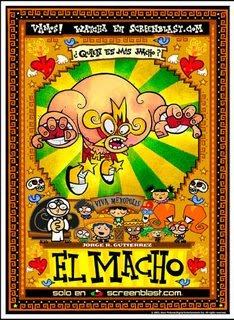 If I ever wanted to create my own show or film ideas, this was not the way to do it, for me at least. To me, there is nothing more fun, and painful, than coming up with stories, characters, and worlds, and then developing them into an inventive and original world. Story & Design was and is what I'm really passionate about. After I finished Carmelo, it won the Student Emmy and I nervously turned down offers to go into CG. Unemployed but full of rebel spirit, I began pitching an internet show idea called El Macho and Sony bought it. And that was it, I was hooked on making my own stuff. Looking back, it might not have been a safe career path, but it was exactly what felt right at the time.

JA: While working for Sony's Screenblast you had no limits on your story ideas, desings, and colors; what was it like working for a company that allowed you that kind of freedom? 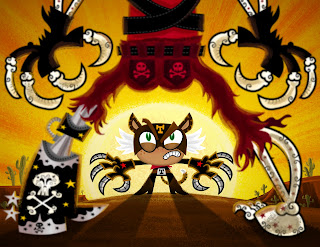 JG: It was the greatest thing on earth! Seriously, I had just graduated from the Animation program and a big studio said, "here's a bunch of money to make your own cartoons". I felt like I was the luckiest macho on earth. I hired my pal Roman Laney (who would later become the El Tigre art director) out of CalArts and with Sandra's help, we went at it! It was so much fun! It was also incredibly scary. If anything was bad, which it often was, we had no one to blame but ourselves. But mostly me.

That also set very unrealistic expectations as to the idea of getting paid to do my own thing. Like I mentioned earlier, I was hooked and after El Macho ended, I thought it would be easy to get another show going. Getting that to happen again took years of breaking our backs, blood, tears, and many heartbreaks. We had four shows die in development before El Tigre finally went to series. 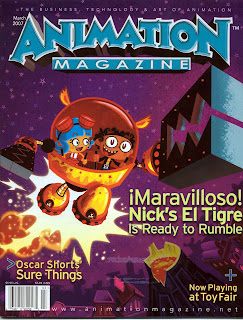 JA: El Tigre was Nickelodeon's first all digital production; what sort of problems did you encounter creating an entire show without the use of paper and pencil?

JG: It was a lot easier than you think. Most of us had never worked on Cintiques before, so we all took the plunge at the same time. We had all worked on previous productions, so the Tigre digital pipeline was based on everything we thought really didn't work, and worked, on other shows. Tim Yoon, Dave Thomas, Roman Laney, and myself worked really hard to make sure we got the most bang for our buck.

As far as Tigre being Nick's first ever Flash show, things went incredibly well. Better than expected even. A lot of us had worked together on previous Flash productions like Mucha Lucha at Warner Bros. and The Buzz on Maggie at Disney, so by the time we started developing El Tigre we had a very good idea as to how far we could push the technology to get the look we wanted. Our Illustrator, Photoshop, Flash, After Effects pipeline was super smooth, and the series, I'm very proud to say, was always on time and on budget. Aside from the just unbelievably talented crew we had in the US, we were very lucky to work with the kick ass artists of Boulder Media in Ireland, and Six Point Harness in LA for our "overseas" animation.

I'm actually starting an El Tigre blog where I'll be braking down how we made the series: http://tigreroar.blogspot.com/

JA: Tell me about the group of artists you worked with to get the show running, including director Dave Thomas. 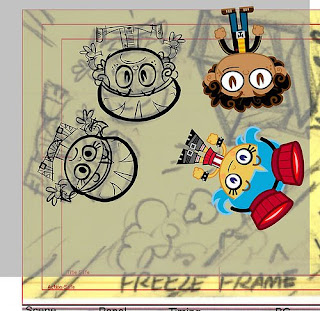 JG: This might take a while! It was kind of ridiculous really. We had a plethora of bad asses. Just to name a few: The incredible Doug Langdale (creator of Dave the Barbarian) was our story editor, super genious writer Scott Kreamer wrote more incredible scripts than anyone, the super man of animation, Dave Thomas, was the Supervising Producer & Director, the infamous Gabe Swarr was the board supervisor and then a director, Roman Laney & Gerald de Jesus art directed the hell out of the series, Shawn Patterson composed his heart way with the music, the lovely Sandra Equihua designed most of the cute and sexy girls, and won an Emmy for it, super star Steve Lambe (and Miah Alcorn) helped out on character designs & props, layout genius Fred Osmond became an Assitant Director, the BG crew was just awesome with Katrien Verbiest, Joseph Holt, Su Moon, Dee Chavez, Eric Gonzales, Kyle Newswald, super star art director Tod Polson doing half the color scripts, the world famous Katie Rice was doing layouts, special poses, and designs. Matt Gadbois and Aaron Horvath editing and animating, Su Moon, Stella Lee, Javier Guzman were inking away. And on storyboards we had the perverse genius Ricky Garduno, super funny drawer Eddie Trigueros, ex-Spumco mad man Luke Cormican, cinematic genius Sean Szeles, power house Fred Gonzales, and then Ray Morelli, Miss Mindy, and Katie Rice helping out with board revisions, and Dave Thomas (and later Gabe Swarr) doing at least 20 pages of bad ass beat boards to get each episode started.

Check out Dave's beatboards here: http://ownerofwendys.blogspot.com/ If I forgot to mention anyone, I am incredibly sorry. We really were a big happy family and even hung out outside of work. I would kill for my crew, I owe them everything.

JA: Do you have a favorite episode of El Tigre? 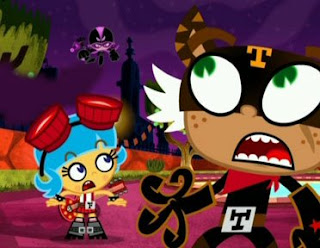 JG: Without a doubt it's our Halloween & Dia De Los Muertos special, The Grave Escape. It's really close to my heart. So many great elements in this one: a funny & tragic script by Doug & Kramer, Dave's superb beat board and razor sharp directing, super inventive boards by Ricky and Eddie, Roman, Jerry and Todd went nuts on the BGs and colors, Shawn's intense & heartfelt music; man, there's just too many things to mention. Plus it dealt with all my favorite themes: tradition, family, sacrifice, fathers & sons, legacys and death. And I believe it's the best reprensentation of my all time favorite Mexican holiday, The Day of the Dead, we even got married that day. I also worked extra hard on this one since it meant so much to me as my grandfather had just passed away. This is also the episode I submitted to ASIFA the year El Tigre won the Annie for best show. It was really rewarding to see how it turned out in the end. Only time will judge the work we did on the show. 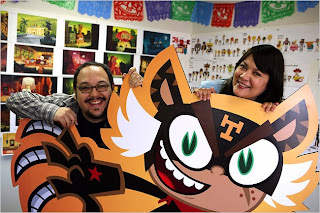 JA: If you could sum up your work in one word for me, what would it be?