#25. A Conversation with Sandra Equihua 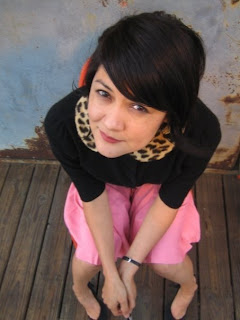 JA: You grew up in Tijuana developing a love for character design at a young age, and would find your niche for illustration thanks to Rafael Lopez at Art Center in San Deigo; how did he serve as an influence, and what were your impressions on your future career as you went to school for Graphic Design?

SE: During my years in university, I would attend the yearly design conferences given by the AIGA in San Diego. It was here where I first heard of Rafael Lopez. He presented some of his work and I was really taken aback by it. It was so colorful and he employed substance in everything he did. So years later, when I discovered he'd be giving an Illustration class through Art Center at Night, I signed up without thinking twice and took the course. He taught us to conceptualize and to experiment with technique, color and ideas. He had absolutely no shame in sharing any of his theories, which is what I've found a lot of professionals not doing. Although I've strayed a bit from Graphic Design, I feel that I still find myself applying a lot of the theory I learned throughout university in composition, shape, and logic. I tend to be very geometrical and strive to be a little more organic. I graduated with a BFA and worked in the Graphic Design field in Mexico for a year but didn't feel very inspired or connected. It wasn't until I moved up to LA where I finally discovered that I could blend my three favorite things: character design, graphic design and illustration, and have them actually work together!

JA: How did you meet Jorge Gutierrez? 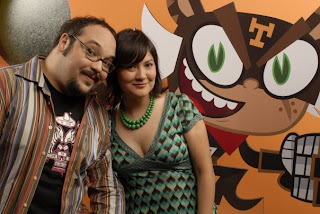 SE: I met Jorge in Tijuana, Mexico when I was 17 and he was 18. My older sister had become friends with him first and kept telling me about this guy who I would really get along with because "he's crazy and likes art, just like you!" She insisted so much, that I finally agreed to meet him. So she set up a blind date and we all met at a rock concert for a band called La Lupita. From day one, Jorge promised me that I would never be bored so long as I was with him. It's been quite the ride ever since!

JA: The two of you would go on to develop a groundbreaking series together for Nickelodeon and Nicktoons Network, El Tigre: The Adventures of Manny Rivera; tell me about the origins of the characters, story, and how it went from concept into production. 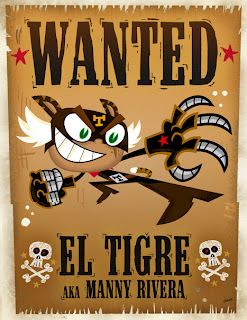 SE: Well, it took a while! From the moment the idea is born to actually getting it out there takes some time. A lot of the character's traits are based on Jorge's personality and childhood memories. Mine as well. The same goes for the storytelling since we really wanted to use true experiences, not only ours but the writers and artists. If anyone had any sort of idea, they were more than welcome to throw it into the pot. The pilot itself took about nine months to make and from the day the show was optioned to the day it premiered it was about two years. We discovered that patience really is a virtue!

JA: What was it like seeing the characters brought to life with amazing voice talents like Alanna Ubach, Eric Bauza, Charlie Adler, Carlos Alazraqui, as well as guest voices such as Bruce Campbell and Danny Trejo? 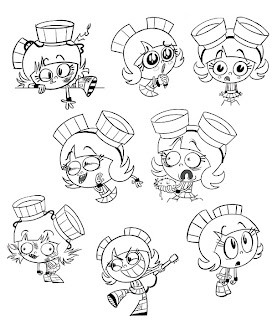 SE: Seeing our characters talk for the first time was amazing! All the actors brought such life into our designs. It felt as though the characters were meant to be voiced by the people we chose! It was uncanny. Voice casting can be a very laborious and extensive process. You need to listen to a plethora of voices that come in to try out for the part. But there will come a time when one voice stands above the rest and that's when you know you've hit the jackpot! That's how it was with Alanna Ubach, Grey Deslisle, Carlos Alazraqui, and Eric Bauza, our main characters! We were so fortunate to have been able to collaborate with such diverse and cooperative talent! All of them gave it their all 110% of the time. It didn't matter whether they were sick, or hungry, or having a bad day. All of them had such patience! They would all show up and wow us every single time. On the show, we would love it when the voice talent would bring a little something extra to the script, be it ad-libbing or putting an emphasis somewhere we didn't expect. It just made it all the more special and these guys were so good at it. They made making the show all the better!

JA: Speaking of bringing characters to life, you also had a brilliant team of artists like Katie Rice, Fred Osmond, Luke Cormican, and many more working on the show; tell me about the process of assembling a team like this one to get your series running. 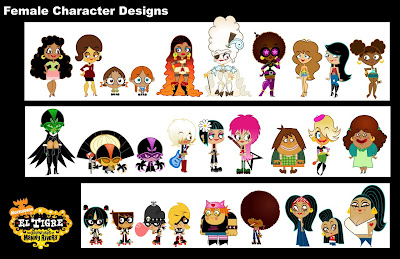 SE: It seemed as though the stars were aligned for this one! We met the great talents that are Katie, Fred, Luke earlier on which meant that we got to meet other great talents as well such as Gabe Swarr, Gerald de Jesus, Eddie Trigueros, Joseph Holt, Steve Lambe, Katrien Verbiest, Ray Morelli, Miss Mindy, Jeremiah Alcorn, Chris Battle, Su Moon, Steve Lambe, Eric Gonzales, Aaron Horvath, Fred Gonzalez, Brandon Kruse, Stella Lee, Matt Gadbois, Tod Polson, Denise Chavez, Dave Thomas, Roman Laney, Sean Szeles, and Ricky Garduño. All of them so humble and modest in what they do, but have such extraordinary and enviable talent! When I heard we were going to get to work alongside all these amazing people my head almost exploded! Who wouldn't want to work alongside geniuses on a daily basis!? I learned so much about playing around in new styles, trying out new techniques, having fun with new color palettes, etc. Not to mention there was always a good attitude from everyone, despite the crazy crunch times we would sometimes have, our crew would make the best of it. The more we worked in the animation industry and went from show to show, the more people we got to meet. Eventually, we found ourselves with quite a team. Dave Thomas did an amazing job as Supervising Producer and Director, Roman Laney as Art Director was a god sent, what else can I say. It was a pleasure to have worked with such a stellar team and one never stops learning!

I just think we all had so much history together and our paths had crossed so many times and we knew what our best qualities and strengths were, that it was inevitable for all of us to work together. I really hope we can get everyone back together on future projects! 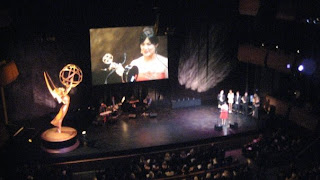 JA: I have interviewed various people involved with the series, from Katie Rice in storyboarding to Myra Lopez in post-production, which really makes one appreciate all the different talents that have to come together to bring the show to life; these talents would eventually get the show recognized by People Magazine as one of the Top 10 TV Shows of 2007, also receive an Annie Award for Best Animated Television Production for Children, and you personally would take home an Emmy for Individual Achievement in Animation as a character designer; tell me what it was like to be so widely recognized for your hard work.

SE: It felt flattering and so surreal! Such a whirlwind of successions from start to finish! To this day were still getting tons of fan mail, and always a treat, fan art which is a constant reminder that El Tigre was appreciated and that putting all our effort into our show was totally worth it. We all worked so hard and during the entire time, there was so much camaraderie, it never really felt as though we were laboring through the day at a job. It seemed as if we were working as a little family, very intimate. I truly believe that this element of togetherness brought everyone closer and pushed us to do our best all the while still having fun. It was a win, win situation.

JA: Let's talk about your work as a character desinger; you have worked for Disney on The Buzz On Maggie, Warner Bros. on Mucha Lucha, and Nick Jr. on Wow Wow Wubbzy; how do these major studios differ from each other to work for?

SE: For me I guess it wasn't so much about the studio, I guess it was more about the project I was working on and the people I was working with and got to meet along the way. On WB's Mucha Lucha, I was hired as a freelance artist under Jorge's supervision, so I was lucky enough to have a private teacher to guide me through and teach me the ropes. Designing on the show was a fun and enjoyable experience. When I got to Disney to work on The Buzz on Maggie, I felt that, thanks to my previous experience on Mucha Lucha, I was ready for anything. Unfortunately, I couldn't have been further away from the truth!

This was where I had my first chance to work under very compressed time. Everything was very fast and had to get done quickly. So by the end of the show I felt like I was a fully graduated design ninja! It was as though I was on a sugar high 24/7, just go, go, go! So when I started on Wow, Wow, Wubbzy, I came in with the same frenetic mentality which was, I guess, the wrong kind! Everything was a little slower paced in the character design department so I was thrown a little off track. Bob Boyle was incredible in steering all of us and eventually, I got the hang of the rhythm and learned a ton of things along the way. Wubbzy was a great show to work on!

SE: That's a toughie, but if I had to chose one, I'd have to say Tex Avery's The Flea Circus. Everything from the animation, the BG's, the color, to the design of the characters to the voice talent. Avery is a genius! Everyone knows that! That being said I'd have to add all the "of Tomorrow" cartoons that he did like The House of Tomorrow, Car of Tomorrow, TV of Tomorrow, and Farm of Tomorrow. All too good!

JA: What are some of your favorite memories working in animation? 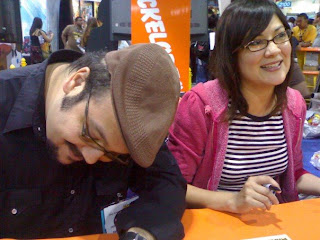 SE: Well, all of my job experiences hold something near and dear to me. But in general, I'd have to say that knowing about great talent and then actually meeting them, that never gets old. I still get extremely flustered whenever I meet someone I extremely admire! Working with friends has also been a huge plus! There's nothing quite like working with a group that you respect, admire and get along with. That, and of course the entire El Tigre experience including our Annie wins, the Emmy, honorable mentions, nominations and very recently, seeing indigenous children in Patzcuaro, Michoacan playing with El Tigre pogs!

JA: If you had to sum up your career so far with one word, what would it be?