#60. A Conversation with Electra Avellan 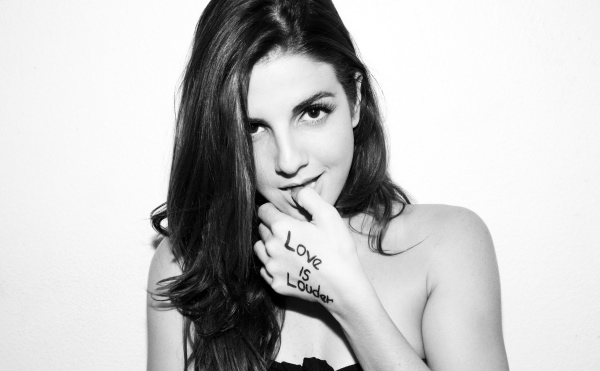 Jason Anders: So let's talk about Machete and what it's like to work on set with your family.

Electra Avellan: I can't talk much about the production of the film. Not yet. What I can say is that it will surprise everyone. It's very well done- I believe Robert has a keen eye for what's good, and this film is just that- really good! The cast is amazing. I've been so fortunate to work with such wonderful people. Working with Robert Rodriguez is always an adventure, he's so involved in the project that you live every part of it very intensely. And of course my sister is the most amazing woman in this world, so I was very fortunate to work with her again- we had so much fun. 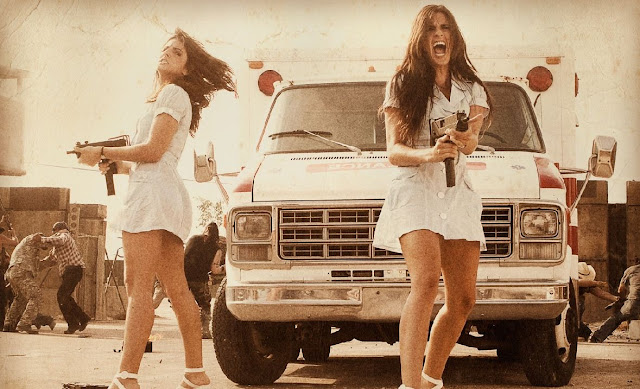 JA: What originally inspired you to take up acting as a profession?

EA:  I started acting professionally when I was three years old. At that time it wasn't my choice, it was my mom's choice because she is an actress as well. As I grew up in the Entertainment Industry in Venezuela, and watching her act, I realized that I was born to do this. Life is better when I am in front of the camera- I love it, I live for it. 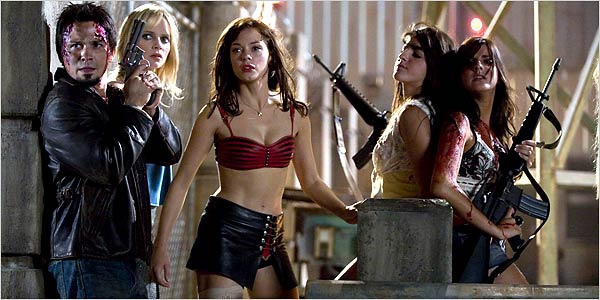 EA:  Planet Terror was my first "American" film, and it was an amazing experience. I loved working with Jeff Fahey, he was such an incredible friend, and he taught me to shoot guns and look like a badass. I also loved working with Freddy Rodriguez. He taught me and Elise how to focus no matter what is going on around us. And Marley Shelton, she's such a good actress and it was so inspiring to watch her act. 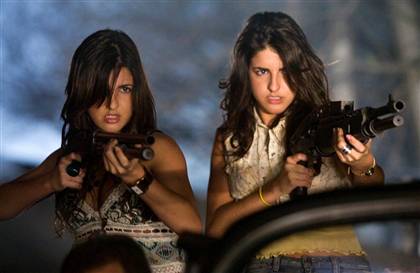 JA: What are your top three favorite films of all time, and why?

1.) Adaptation is the best film ever! So well done. The story wraps you around and leaves you completely vulnerable. I love Meryl Streep and Chris Cooper, their relationship is so passionate and real, and of course Nicolas Cage is so fucking good! I cried my eyes out when his twin brother dies. So sad, but so amazing! 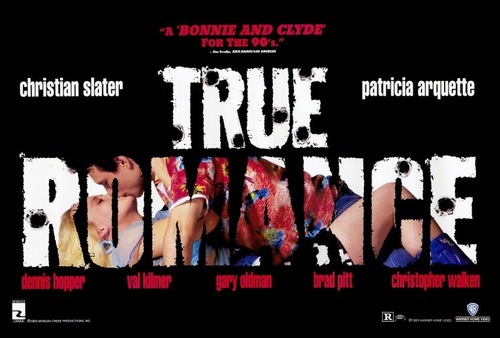 2.) One of my favorite love stories is True Romance. It is so dangerously hot! An incredible, mind blowing film. The lead cast in it is brilliant, and the cameos are even better.

3.) Desperado. I have to admit, it might sound cheesy because my uncle and aunt made it, but I love this movie. I think it is Robert's best interpretation of love in a film. The killing scenes, the shooting scenes, the explosions, the sex scenes, the acting, the characters in it, Salma and Antonio! I fucking love it! 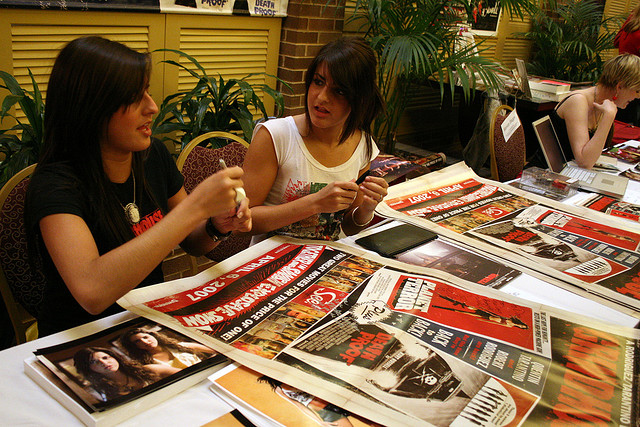 JA: Tell me about your recent experience as a producer, and have you considered directing as a possibility?

EA: I have had incredible experiences as a producer, both negative and positive. If I told you, you wouldn't believe it. One day I will write a book. Directing is not something I have considered yet, but maybe one day. Who knows?

JA: Are you inspired by other actors?

EA: Oh God, are you kidding me?  Let's start with the number one of all: Penelope Cruz! She is brilliant- always present, always vulnerable, always aware of the camera. She is my favorite! My second favorite, and I love to admit it because I met her and she is the coolest girl ever, is Lindsay Lohan. She is a movie star. No matter how much crap the tabloids write about her, when the camera is on and the word "action" is said, she is on! She is such a good actress that she makes any bad movie look good. (If you don't believe me, watch Labor Pains. Bad movie- but she caries it all the way, and she is so funny! I have a crush on her a little bit.) 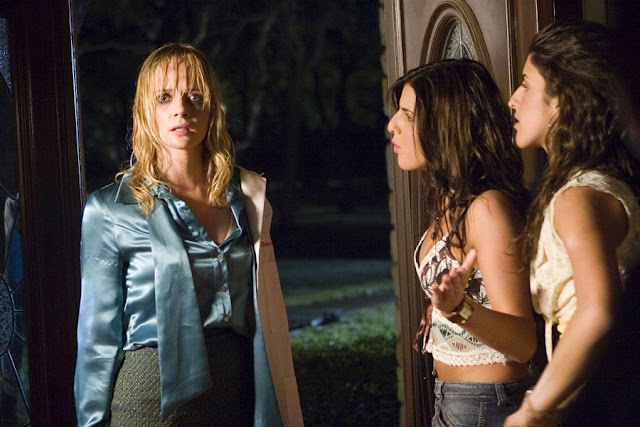 And then I have the rest of my favorites: Meryl Streep, Rachel Weiz, Laura Linney, Natalie Portman and recently I was completely taken by the very talented Ellen Page. That girl can carry a movie so graciously and keep you there.  She keeps you interested and emotionally invested. Great actress! She has a wonderful future ahead. Penelope, though, is my number one. She inspires me above all, in every movie she's ever made. Vicky Cristina Barcelona. I love you, Penelope!

JA: Let's talk about The Black Waters of Echo's Pond; tell me about your memories on-set, and what it was like to work with Danielle Harris and Robert Patrick. 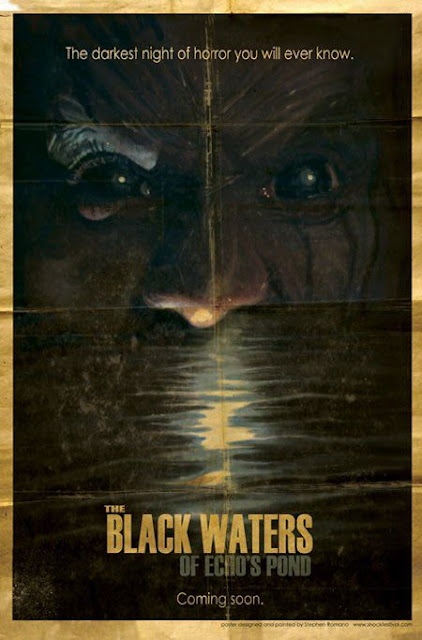 EA: The Black Waters of Echo's Pond was a very touching experience. I was given a great opportunity to read for the character of Renee, and when I found out I got it I cried my eyes out. Not just because I needed the job, but because I know Sean Clark is such an amazing writer, and I knew this was going to be a great film. Thank you so much, Sean!

Working with Danielle Harris was awesome. She is such a cool chick! Always very professional and such a good actress, I would watch her and get lost in her performance. She taught us a lot while filming, I would work with her any time. And of course Robert Patrick. I grew up watching him, and I had a huge crush on him from Terminator 2. When I met him I was so embarrassed, it was the weirdest thing. I think he picked up on it. He's so hot and cool! And such a great actor, too. All in all, it was my pleasure! 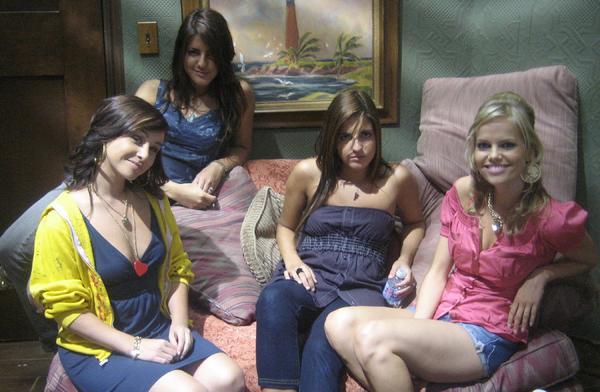 JA: What do you think makes a great movie, and what are some of your favorite movie moments?

EA: A great movie is made by the following:

1. A great storyteller. (Director)
2. A mind-blowing, amazing Director of Photography.
3. Great Actors. (Not famous necessarily, but vulnerable, real, fantastic and able to transmit human emotions.)
4. A wonderful, hard-working editor.
5. An amazing soundtrack is a must.

My favorite personal movie moments were hanging with the crew in all of my films. The crew always takes care of me, and I take care of them. They are so freaking cool. 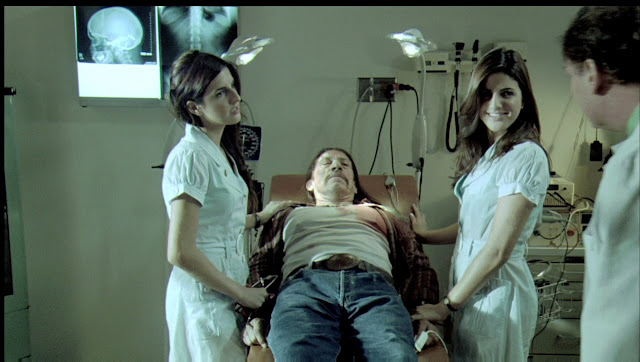 JA: Have you ever considered another profession outside of the entertainment industry?

EA: I always wanted to teach high school, but I don't think I can anymore. Every time I go to my brother's high school his friends start screaming my lines from Planet Terror... and I am sure you know what I mean. 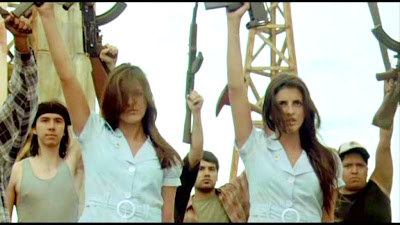 JA: Do you have any dream projects you would like to work on?

EA: I do have a wonderful dream project that I have had the opportunity to jump into and focus on for the last few months. It was written by Nicholes Cole, he is an amazing writer. Mark my words- this man will win awards with his screenplays. Anyway, my dream has been to work with him and my father, and right now we are all producing together! I am the happiest girl alive!

JA: If you had to sum up your career so far with one word, what would it be? 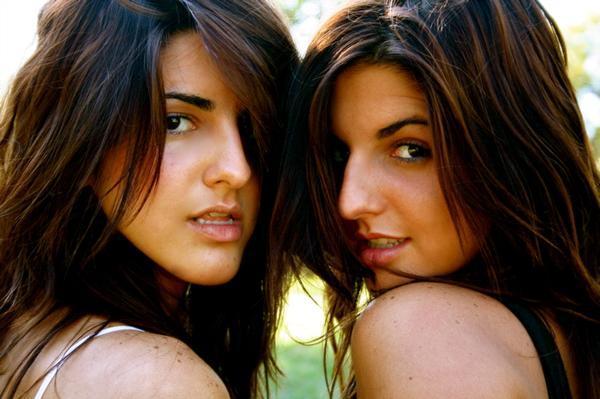