#104. A Conversation with Mercedes Arn-Horn 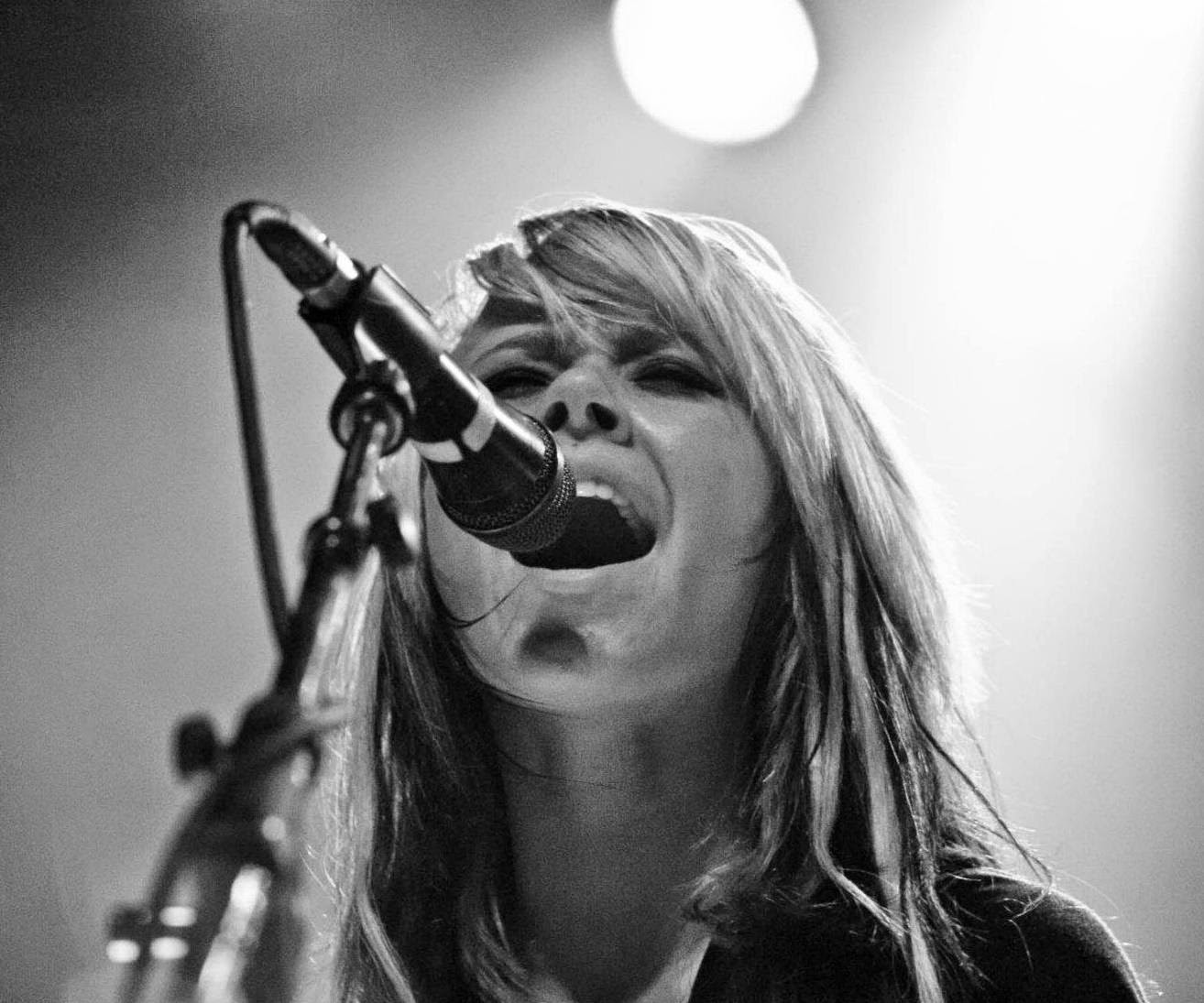 The Fulle Interview with Mercedes Arn-Horn
(click below to play)

Jason Anders: It's Labor Day, but I'm in the Christmas mood because I just listened to your cover of "I'll Be Home For Christmas" and it's so awesome! You guys are blowing up before you even release your first album.

Mercedes Arn-Horn: Oh, really? Thanks so much, that's awesome! I guess it's all in the way you look at it, but it feels good to have all these fans on Twitter who are enjoying the music. We're happy about it.

JA: Let's start with the genesis of your song "I Sell Comics" and Walt Flanagan- How did that come about? Were you already listening to "Tell 'Em Steve-Dave"?

MA: David's friend listened to them a lot and said "hey, you should send your stuff in!" We sent it in not thinking we'd get a response, and we got one. It was great!

JA: Have you acquired a lot more Twitter followers and fans based on that song?

MA: Oh yeah, so much more than we thought we were going to. It was such a great experience. We didn't think that the "Tell 'Em Steve-Dave" guys were going to be that into it, we were really happy that they were. We got a lot of responses from their fans as well as our fans, so it was great. 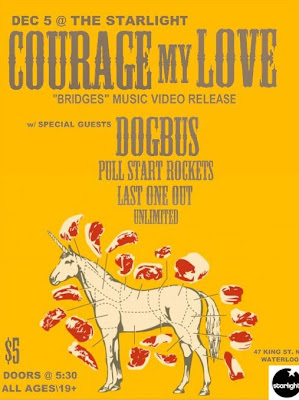 JA: Are you actually a fan of comic books?

MA: I definitely am! Walt actually wrote the lyrics to that song, but we're all HUGE comic book fans.

JA: Do you have a favorite comic book hero?

MA: For me it's hard to choose between X-Men and Batman.

JA: Our producer Brittany is wondering what you call those fries in Canada with the gravy...

MA: It's called poutine- We love it, they have the best poutine in Ottawa. We just went, it's called Smoke's Poutinerie; it's fries, bacon, cheese and whatever else you want to put on it, like jalapeños and pulled pork... it's so good!

JA: Sounds so good. Have you guys ever been to a comic convention?

MA: When I was younger we went to a couple in Toronto, we didn't get to go this year because we were doing some studio stuff, but I loved it. I didn't dress up or anything, but all the comics and people there were just awesome. It was so fun.

JA: Who would you dress up as if you were going to get decked out?

MA: I'd probably go as Colossus from X-Men and have metal skin, because I have unlimited funds. 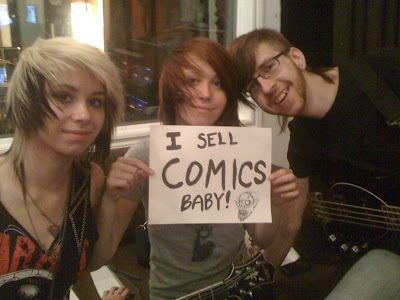 JA: So what made you originally decide to get into music? Do you remember the first record you heard that made you say "get me a guitar, I wanna play"?

MA: One of the first shows I ever went to when I was eleven was an Alice Cooper concert, and that really inspired me- All the theatrics, he had a guillotine and actually got executed onstage, he also had snakes and dancers and everything. That was a bit over the top but really inspired me. After that I got really into heavier bands. So I think that my parents and a couple of teachers are to blame because they were really into bands like Sex Pistols and Bob Marley, that sort of thing really influenced me a lot.

JA: Do you think you'll eventually start incorporating a guillotine onstage with you?

MA: Maybe, you never know. I do love the theatrics, but we don't even have fire in our show yet.

JA: I heard you had an interesting run-in with Gene Simmons...

MA: He came to Toronto and we showcased for him with two other bands, I think. It's really cool because he's kind of an icon and it was awesome that we got to meet him. The highlight of this story is that after the show, my sister Phoenix and I got to meet him. He asked if she would sit on his lap... she declined, gracefully. 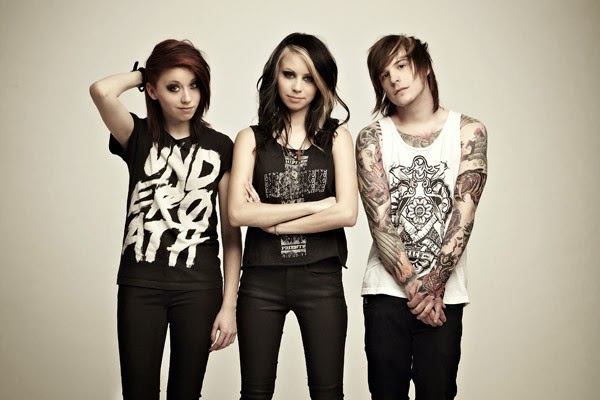 JA: The same thing happened to us when we tried to interview Gary Busey, he said he'd do an interview for $5,000.00 and if Mary, our photographer, would sit on his lap. She also gracefully declined. So tell me about the origins of your band name, who decided to name it after the movie Things to Come?

MA: That movie is awesome! I can't remember if it was Phoenix or it was me, but I think we both came to that decision simultaneously. We really wanted a positive band name because a lot of band names seem to be on the negative side, even if the band is a positive band. So we were searching for a name that didn't sound too lame. We were watching Things to Come at one of those old re-run theaters, and when the line came out were both just like "that's the name. It's perfect."

JA: What are your five favorite songs and/or records of all time?

MA: There's so many! I'm really influenced by Oh, Sleeper. I don't have their new album yet, but I've heard two songs from it and it's really good. I really like the album WHEN I AM GOD. I'm also influenced by BRAND NEW EYES, Paramore's album. I really like pretty much anything that Four Year Strong puts out. I love a lot of older bands too, like The Ramones. I like the song SHEENA IS A PUNK ROCKER. I really like the Sex Pistols. I'm a fan of any band that can mix styles, there's too many to choose from.

JA: I don't know how often you listen to S.I.R., but ever since you called in that morning on "Jay & Silent Bob Get Jobs" they've played "I Sell Comics" almost every single day.

MA: Seriously?! That's awesome! I listen to a few of them because I am actually a fan, after David's friend told us to start listening to them. Those guys are so funny! I'm really happy about that. It's definitely helped us out a lot! 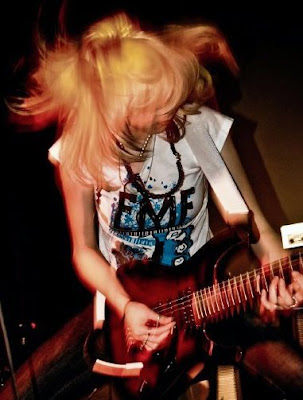 MA: We're hoping to get that together soon so that we can come and play on their show. We wrote the song for them to be on that show, they all like it and their fans like it, we all like it and our fans like it... so hopefully the producers like it too and it will be on the show. It's not up to them anymore, I don't think, it's up to the producers of the show whether it gets on or not... hopefully we get greenlit, too.

JA: What are you discussing as far as upcoming tour dates?

MA: If the whole New Jersey thing works out we want to make a few stops along the way and go to a few different places like New York. It's all in the works but I can't say we have any specific dates yet. Hopefully it works out for October.

JA: Are you guys under a label or agency yet?

MA: We've had a few offers, but we're waiting and looking for the right one. We want a deal that suits our band. We want to keep creative control of all our music, Phoenix and I write all of it. We do have a manager/ producer team, and we want to suit them too in our label search. I'm positive that we're gonna find one soon that will be cool with all our demands. If not, that's okay too. A lot of bands create without labels now. 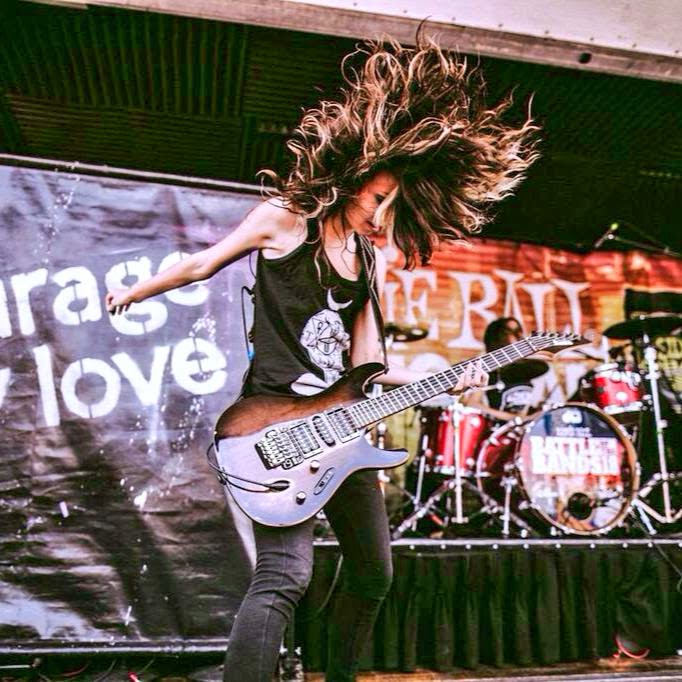 JA: Since your band name came from such an awesome flick, what are your three favorite movies of all time?

MA: I'd say Edward Sissorhands is probably my favorite. I love everything that Tim Burton does, and I love Johnny Depp & Winona Ryder. Also Pan's Labyrinth by Guillermo de Toro, and I love Sucker Punch.  Right after this interview you have to go to Blockbuster and rent Sucker Punch!

JA: If you had to sum up your music with just one word, what word would you use?

MA: I'd say we're very "rebellious". I say that as a band that's improbable... we're a three-piece with two female members, and neither of us play bass, so that's improbably right there. Phoenix is an awesome drummer and really doesn't take no for an answer. I also play the guitar... so I'd say "improbable", too.

JA: Who talked who into starting the band, do you remember?

MA: I think we both really wanted to since I can remember, we've both wanted to be in a band for our entire lives. I don't remember who started that. We've always been writing, even when it was just us two. We wrote rock songs, she wanted to play drums and I wanted to play guitar... we figured something was missing, so we started auditioning bassists. It's always been Phoenix's and my dream. 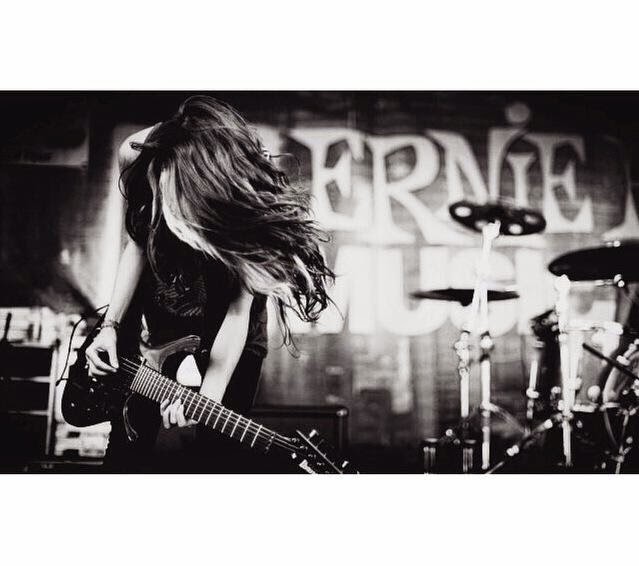