The Purrfect Role: A Conversation with Camren Bicondova

Actress and dancer Camren Bicondova drops in to discuss her experiences on the set of FOX's television series Gotham where she portrays a young Selina Kyle. We also talk favorite movies, inspirations and all about her life before landing the "purrfect" role...

Jason Anders: Gotham is truly a superb series and I really love what you bring to the character of Selina Kyle...

Camren Bicondova: Thank you, I appreciate that!

JA: What is an average day on that set like for you?

CB: Well it's amazing to be a part of, I'm gonna say that. My daily agenda would be arriving at the studio, getting into hair and makeup and then doing some schooling. It's really fun to be able to dress up for Halloween every time I go to work. Then I go on set, and when I have a break I do some more schooling. The tricky part is going in and out of schooling. It's kind of all over the place but organized at the same time.

JA: How big of a challenge is that?

CB: It is very challenging. I just have to remember that if I don't do my schoolwork then I can't do Gotham. I'm a sophomore in high school and there are definitely days I do not want to go, but education is very important. I think that's how I balance it is by remembering that I need to do it in order to do what I love. 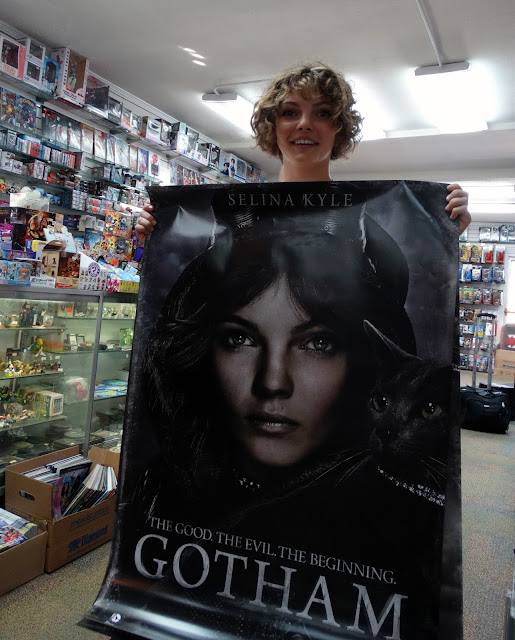 JA: I think I would have done much better in school if my motivation was that I couldn't be on the Batman show if I didn't finish my homework.

JA: Have you always lived in New York or did you grow up somewhere else?

CB: I was born and raised in San Diego, California. My dad was in the military and when I was ten we moved to Hawaii. We eventually moved to Los Angeles so that I could be in the dance industry.

JA: Do you remember what sparked your interest in dance?

CB: I forget what age I was, but my mom took me to see Movin' Out and I just remember how excited the dancers and performers seemed to be and the fun they were having on stage. Even if they weren't singing or speaking they were showing so much emotion without saying a word. I whispered to my mom, "I wanna do that." Ever since then I've been dancing. 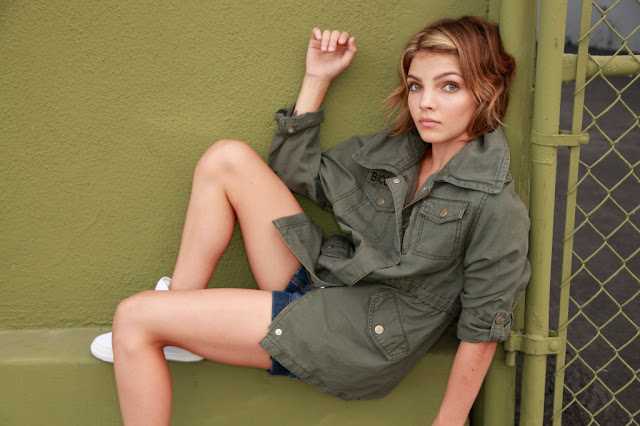 JA: What do you love most about dance?

CB: I consider it a universal language. I was very shy as a kid... well, I'm still a kid, but as a younger child... I was always looking down at the ground and didn't really talk much. I just kind of observed everything. Dance was a way for me to express myself. Anything in general that allows you to express your feelings is very unique.

JA: Do you feel like you've overcome being shy?

CB: I think I've opened up and am not as much as an introvert. I think that being on Gotham and going to these amazing events has definitely made me more of a social person. I would say that there are times when I'm very shy. If my friends are going to a barbecue I may just want to stay home and bake cookies.

JA: At what point did you transition from dancer to actress?

CB: It kind of just happened. I was part of a movie called Battlefield America (2012), cast as a dancer, and the director told me during one scene to say a line. I'm gonna be honest, I had never acted or thought about acting before... so the way I did that line was not my favorite, but it was my first time. That day was when I decided I wanted to start acting, and it happened gradually from there. 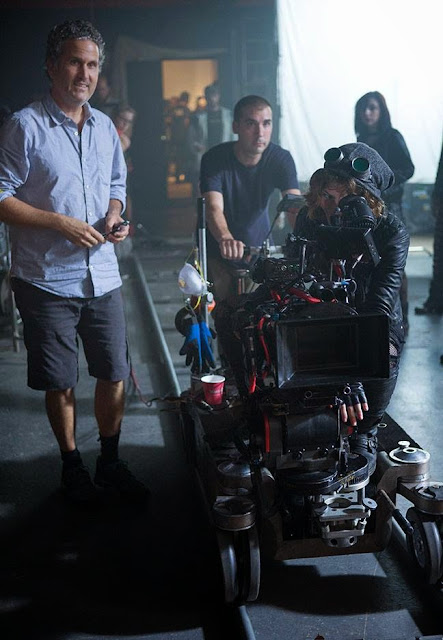 CB: I thought that I was auditioning for a girl named Lucy, "a fourteen-year-old street thief pickpocket who is fierce when cornered and skilled at cat movements." I thought it sounded like Catwoman, but said "oh well, it's Lucy." I just went in like any other audition, having no idea that it would become what it has become. I'm very grateful for getting to be a part of a project like this.

When I got the call, the casting director said "Meow." He said, "You're Selina Kyle! You're on Gotham!" I was like "oh my gosh. This is insane." I was very happy.

JA: With so many incarnations of the character, how did you go about deciding how to play her?

CB: I've been reading comic books and watching the 60's show with Adam West. I watched some movies, too. I mixed my research with my own thoughts, fusing my own perspective with the information from the comic books.

My favorite part from the comic books shows a teenage Selina Kyle in an orphanage, and her and this boy would steal jewels for the supervisor. She never got to keep the jewels for herself, she always had to give them to the orphanage supervisor. It then flashes back to present-day Gotham with her saying, "And that is why I am who I am." What I took from that is that she steals for empowerment.
I took that and I use it when I'm doing scenes of street-thieving.

It's really amazing to be playing such an unpredictable character like Selina Kyle. 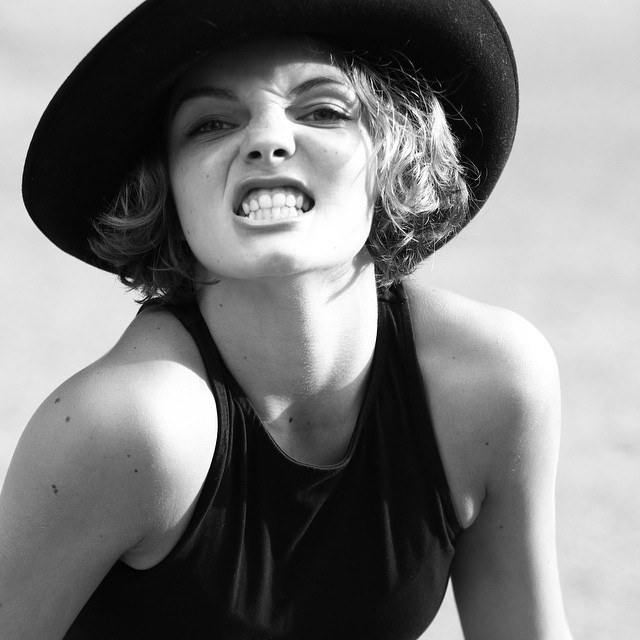 JA: Do you ever wake up in the morning worried that this has all been a dream?

JA: Isn't it the greatest city in the world?

CB: It is! I mean I have to get used to the cold weather, I'm a Cali girl, but other than that I'm loving it. I'm excited to see snow! I think we're supposed to get snow this Wednesday, that will be really fun. I've seen snow at my Grandparents house but it melted pretty much as soon as it hit the ground, so I don't think that really counts.

JA: What is your favorite thing about the process of making Gotham?

CB: I like being able to simply put on a costume and become a different person. I think it's fascinating that it's you, but not you... if that makes sense. There's a similarity to dance- when you're dancing, you're you, but you're also becoming the singer and expressing what the singer is singing. With acting, you're still you, but in my case also Selina Kyle expressing what she is feeling. I think that is really awesome and it makes me very happy.

JA: What do you do for fun when you're not working?

CB: I play with my cats. I like to run and go to the gym. I like to eat. I'm still dancing.

JA: Do you go to dance classes?

CB: I've been taking dance classes, but when I don't have the time to go I just go on YouTube and learn choreography off of my computer. That's pretty much it. I've been eating a lot since moving to New York so I've been dancing and working out more.

JA: Is perfroming on Broadway a goal?

CB: I cannot sing for the life of me. I only sing in the shower when I'm by myself, and I act like I'm at a Beyoncé concert and I'm just loving my life. I think it would be cool to be a part of a Broadway show, but only as a dancer. If I sang I would just embarrass myself. At least at the moment.

I like watching Broadway shows, but all of my focus is on Gotham right now. I'm just going with the flow and seeing where my destiny takes me.

CB: I used to collect nutcrackers. Every Black Friday my mom and I would go buy them, so I have a bunch, I just haven't collected any recently. I think they're the coolest things, although I don't think they're used for cracking nuts anymore. I tried it once and it didn't work, unless I wasn't strong enough. I'll have to try it again.

Also, my clothes collect cat hair on the daily. I have to get a lot of lint rollers.

JA: Nutcrackers and cat hair, there you go. 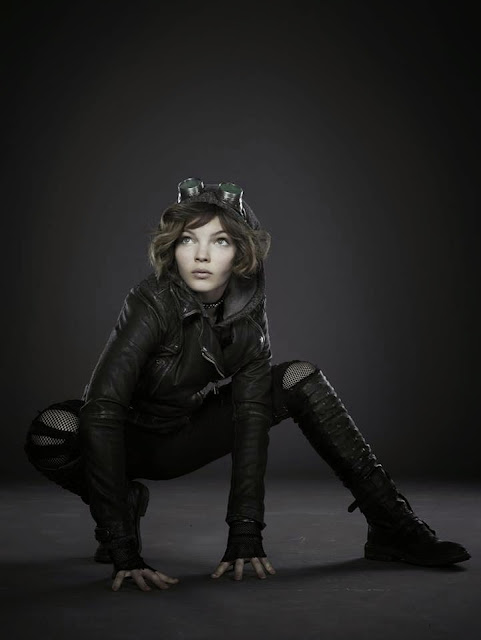 JA: What are three movies that you love?

CB: That's so hard! I recently saw the movie Begin Again (2013) with Keira Knightley and it was amazing. Honey (2003) with Jessica Alba. Another one I really love is Stomp the Yard (2007), it's really awesome. You have to watch them!

JA: Do you have a favorite portrayal of Catwoman?

CB: I really love Julie Newmar and her take on Catwoman in the 60's show. She's just amazing.
My favorite scene is when she was trying to persuade Batman into doing something and he said, "You're very beautiful, Catwoman." She leaned over the couch and said, "Yes... you're quite right, I am." I just thought that was the best thing ever.

JA: It's such a funny show to watch now and see it from a different perspective.

CB: I feel that way when I watch cartoons now that I used to watch when I was little. When you're young, you just look at the images and you laugh if it's funny, even if you don't understand what's going on. I watch some cartoons now and I'm like "whoa, that is an adult joke! What the heck?" But it's hilarious. 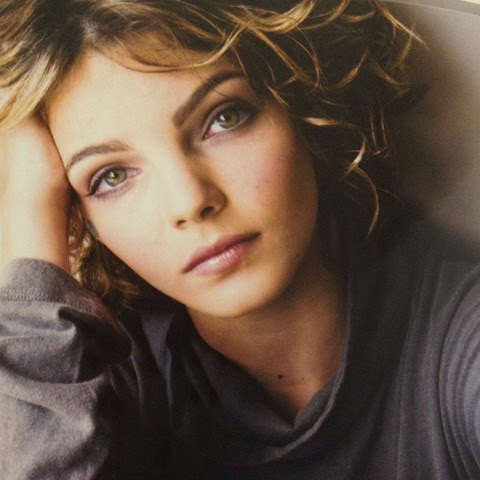 JA: If you had to sum up your life at the moment with just three words, what would they be?

CB: Hmm. It may take me a while to answer this question, so beware of the awkward pauses. I'm very busy so I'm going to say "busy." It's nice being busy because you have things to focus on and you don't get tired very easily. I always get more tired if I'm just standing or sitting for long periods of time rather than moving around.

JA: When you're busy doing the things you love, it energizes you.

CB: Exactamundo! I'm in New York but my family in in California and Colorado, so I'd also say "cross country." A word that I feel right now in my life is "grateful."

JA: I'm glad you're able to appreciate all of the wonderful things that are happening in your life.

CB: I do! And thank you. Thank you for asking me questions!