"A Chance Conversation with Erin Nicole Cline" by Jason Anders 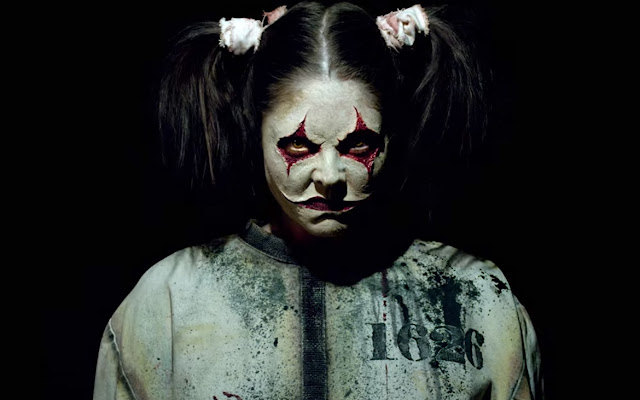 "There is nothing funny about a clown by moonlight."
- Lon Chaney, Sr.

She's been a part of the Universal Orlando family for a decade now, bringing to life classic characters like Lucy Ricardo on the streets of Hollywood and Betty Lou Who in Islands of Adventure’s ‘Grinchmas’. She hilariously parodied pop culture icons Lindsay Lohan and Megan Fox at ‘Bill & Ted’s Excellent Halloween Adventure’, and her ‘Frozen’ parody with Sharon Joy Yost at HHN 24 brought down the house nightly with roars of laughter. She made the 25th year of Halloween Horror Nights unforgettable with her macabre performance in ‘The Carnage Returns’, and this year Erin Nicole Cline took center stage as Chance, the Icon of the event.

If you haven't been to Universal Orlando's Halloween Horror Nights, you don't know Jack. Jack the Clown, that is. Jack Schmidt (as he is also known) took the reins last year as the ringmaster for the silver anniversary of HHN, celebrating twenty-five years of monsters and mayhem with an all new carnival of carnage. HHN 26 picks up right where 25 left off. UO Creative Director Michael Aiello describes the "aftermath of the carnage" as "still fresh", and “Jack's right-hand woman, Chance, finds herself incarcerated for the crimes of last year.”

"Chance bides her time within her cell. But this is not a tragedy for her. This prison is a toy box. It's within the confines of her cell that she enters her horrific "theatre of the mind." She knows that the acts committed inside her mind will manifest in the real - both equally deranged and gothically beautiful."

2016 was certainly a year of coulrophobia (fear of clowns) if ever there was one as a killer clown hoax swept America alongside HHN’s debut appearances of Twisty the Clown (American Horror Story) and Koodles the Clown (Eli Roth’s Terror Tram). Their presence paled in comparison, however, to Cline’s Chance, who could be seen in virtually every aspect of 26’s marketing campaign as HHN’s joyfully psychotic harlequin of horror.

Erin was kind enough to engage in a Q&A with me about her career at Universal and her eclectic performance as the frightening face of the nation’s premier Halloween event. 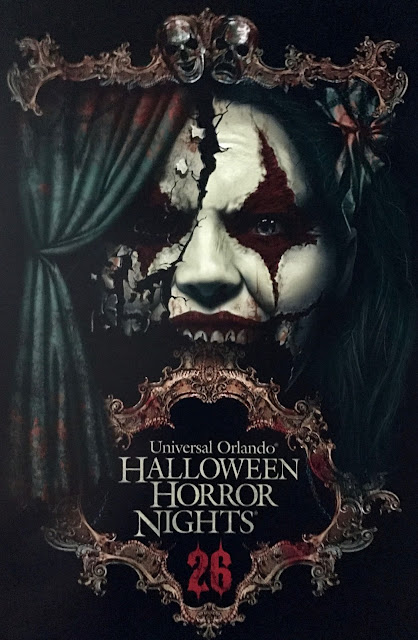 Jason Anders: How does it feel to be the Icon for the highest-rated Halloween Horror Nights in history?

Erin Nicole Cline: It is a huge honor and a great achievement, especially as a woman. There is an ever-present stigma in entertainment that women are neither scary nor funny. I believe Chance proves that invalid. I have loved this character for many years, ever since we created her in 2007. There is quite a bit of emotion and sense memory attached to that time in my life - some good, some not so much. I believe that is why I have such a deep connection with Chance; she is very much a part of me.

This years’ HHN had a bang-up line-up of houses and scare zones, which contribute greatly to the high numbers. I’d like to think she had a little something to do with it.

JA: What is your personal take on the character?

EC: Tisk, tisk. A girl never tells her deepest, darkest secrets. Chance is shrouded in mystery. It is one of the most intriguing things about her. When it was decided that she would be the icon of HHN 26, our creative team thought it imperative to continue the storyline, picking up where last year left off, but never earlier in time. Often, when a villain (or hero, in my opinion) is given a backstory, they are given a tragic flaw… a weakness. It was very important to us to showcase the fact that Chance has no weaknesses. Now, of course, I know who she is and where she came from, but I’ll never tell.

JA: What was your initial reaction to Chance being the Icon?

EC: There were several strong contenders for Icon of HHN 26 and it is quite a lengthy process to present each possible storyline and finalize a decision. I knew Chance was on the table quite early in the year. Some may say it was in the works from the previous year’s Carnage Returns show. She was not only a strong choice, but a smart choice as well. She already had a following of loyal maniacs and that made her a heavy-hitter in the decision room. I was humbled and thrilled. 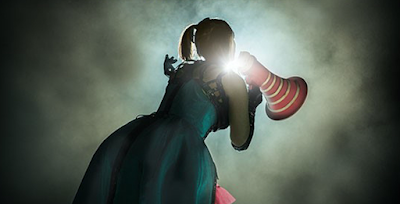 “I couldn’t have asked for a better partner in crime – or horror, in this case. She is a dedicated, thoughtful, and talented actress. She was a joy to collaborate with, and she always puts so much energy into everything she does. I could tell by the reaction that she and Chance were getting last year that she was destined to be an HHN Icon! And the fans loved her this year. I hope Jack and Chance meet again soon.”
-       James Keaton (Jack the Clown)

JA: Tell us about Chance’s scare zone, A Chance in Hell, and what it was like to see other actors portray a character that you made popular.

EC: A Chance in Hell gave guests a theatrical presentation of some of her handy work inside the Asylum. It allowed guests the opportunity to see her and her maniacs in their true element. I assisted with the rehearsal process for the girls portraying her, but I did not take center stage on the street during the run. Each of them brought an individuality and uniqueness to the role, and I was proud of their hard work. 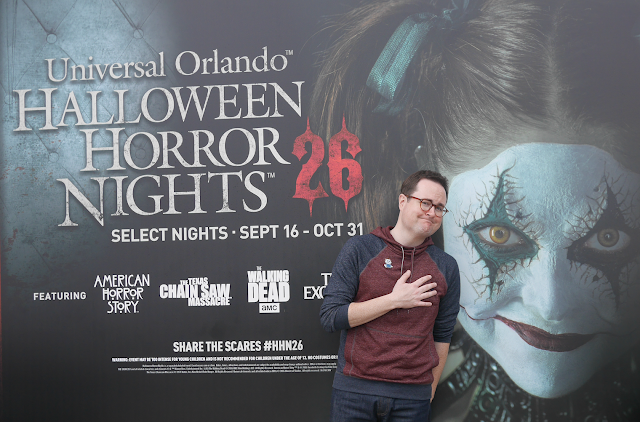 JA: The artwork and advertising for HHN 26 is the best it's ever been, particularly the poster with Chance's cracked face. How surreal is it to see yourself in the advertisements for the event?

EC: The image you see of the cracked face on the merchandise is an artists’ computer-generated rendering that was developed from pictures of me and character concepts for HHN 26. The billboards were certainly a cool thing to tick off of the old bucket list, and it seemed that my face was everywhere. That was a very neat thing.

I am a professional actress, so it is not uncommon for me to see myself on television in commercials, ads, and shows, so perhaps I was prepared for it. But the joy and pride that it brought to my family to see my face (albeit scary) on those billboards, cardboard cut-outs, and Internet ads was the best part of the experience. The shoots were scheduled in the spring, not long after the makeup tests for her new look were finalized. They were two very long, exhausting days but I was so proud of the images and footage our team captured. The photo shoot was particularly memorable, as I can recall both Mike Aiello and Patrick Braillard practically laying on the floor with me while we went on a very dark emotional journey. Though some of the pictures were never released, we were able to capture and expose Chance through a camera lens, and that was a beautiful thing.

"Erin is a fantastic actress. Of the many roles I've been fortunate enough to see her perform here at UO, Chance is her most unique. Chance's look was created by us, but Erin has built that character all on her own. It is her commitment to the role that has made Chance what she is to so many HHN fans around the world."
-       Michael Aiello, Director of Entertainment

JA: What has your ten-year career in Entertainment been like for the company, and do you have a favorite moment as a performer?

EC: The roles I have performed during my career with Universal read in chronological order as follows:

I am currently holding a full-time contract as Lucy Ricardo. I can’t say that I have a favorite moment. This lists reads so eclectic, but I will say that there is nothing like performing in the final show of Bill and Ted’s Excellent Halloween Adventure.

JA: Where did the idea for Chance to be the Icon for HHN 26 come from?

EC: That would be a question for our creative team, but I will say that capitalizing on a year in film entertainment where women were seemingly taking over was probably a factor. 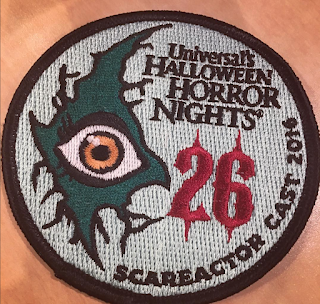 JA: Tell us about the story behind Lunatics Playground 3-D.

EC: It is a journey inside the mind of Chance. The guest moves through the space and essentially in and out of her realities - the actual reality versus the beautiful disaster that she sees. We see how she has taken over the asylum, killing all the doctors and guards, and building her empire of loyal maniacs. My fiancée recorded the victims’ voice-overs for the house, which was a cool connection that we were able to share. And quite funny, as well.

JA: What is your favorite thing about being an actor, both in theme parks and film?

EC: Acting in theme parks will teach you skills that you can never learn in a classroom or a workshop. It is a constant character study and you must quickly develop the ability to read people - whether that is by their body language, tone, or family dynamic. It is a skill you can use in all walks of life, and I feel fortunate to be able to utilize and refine it. For me, acting for the camera is the most vulnerable and exposed performance you can give. I have been drawn to it since I was a young girl. I feel like performing for a camera is the most honest position you will ever find me in. It’s addictive. 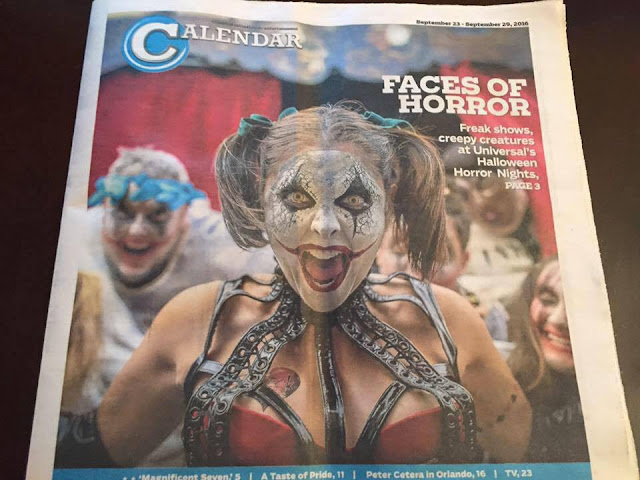 JA: What are your all-time favorite Universal attractions?

EC: Universal Ride - May very well be a tie between Jaws and Back to the Future: The Ride / Universal Show - Universal’s Horror Make-Up Show / Universal HHN House - Nevermore: The Madness of Poe

JA: In your mind, where does the end of HHN 26 leave Chance?

EC: Perhaps she will return for an anniversary year. You’ll find out…

JA: How would you describe yourself in three words?

EC: An even better question is: How would you guys describe me in three words? 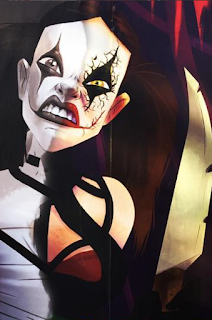 “Three words to describe Erin would be: talented, fearless, and beautiful.”
-James Keaton (Jack the Clown)

JA: What is your advice for both working and aspiring performers in the industry?

EC: Search deep within yourself and understand what your true meaning of success is - it may change over time (which is okay) and the answer may surprise you. You have to put in the work to see the results; train, focus, take classes and workshops, understand your business, spend the money on good headshots. You may have to start small and work your way up. Do not compare your successes or failures to someone else's. In this business there may always be someone better than you, but there is no other person like you. Everyone has a unique journey.