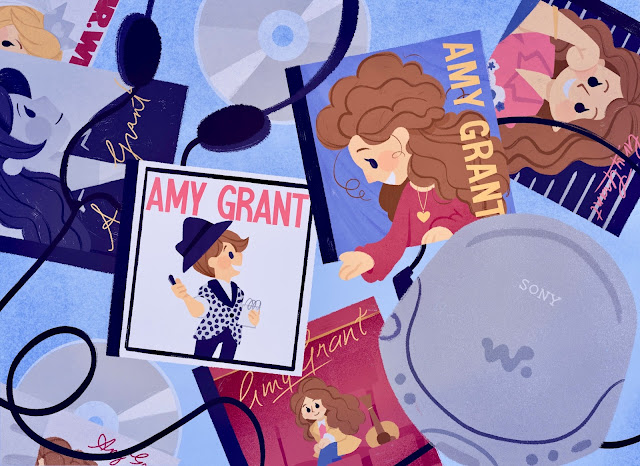 Written by Jason Anders | Illustration by Kaelin Richardson
Last week, my girlfriend and I were at The Illiad Bookshop in North Hollywood when I reached for a biography on the music shelf entitled "Mosaic: Pieces of My Life So Far" - the author; Amy Grant. She is the bestselling Christian artist of all time, and one of the only musicians to truly transcend that label and become a pop sensation. As I plucked the book off the shelf, a nearby stranger said, "Amy Grant! She's amazing!" The man went on to proclaim that her song "Baby, Baby" has "one of the tightest basslines in all of pop music." We briefly bonded over our love for the woman, in what felt like a true movie moment, before going our separate ways. I continued to rant about Grant to my girlfriend, trying to capture how much of an icon she was to those of us who grew up with her in the spotlight.
As her book describes, Grant was subject to adulation, speculation, and scrutiny during the height of her popularity. She generated controversy within the Christian community for being "too worldly" and "too sexy," and suffered a "barrage of condemnation" following her divorce and remarriage. The obstacles and ridicule that Grant has overcome in her life, while remaining a compassionate human being with a heart of gold, remains an inspiration to me. I blast her music regularly, and even her most dated 80s synth sounds fresh and educes endorphins every time without fail. She was the first celebrity I ever met, and the first star I remember imitating as a child - I danced around my living room at the age of 5 in a white leopard print jacket, lip syncing the lyrics to her music video for "Wise Up."
It is no understatement to declare Grant a music legend. She is a recipient of six Grammy Awards and has six pop chart-topping hits to her credit. In 2006, she was honored with a star on the Hollywood Walk of Fame, of which she says, "If you wanna go out to California, you can stick some gum on my star." She graciously accepted this lifelong fan's invitation to ask her a few casual questions, themed to the title of her 2003 album, Simple Things. Below is one my simplest, yet favorite, of my interviews. 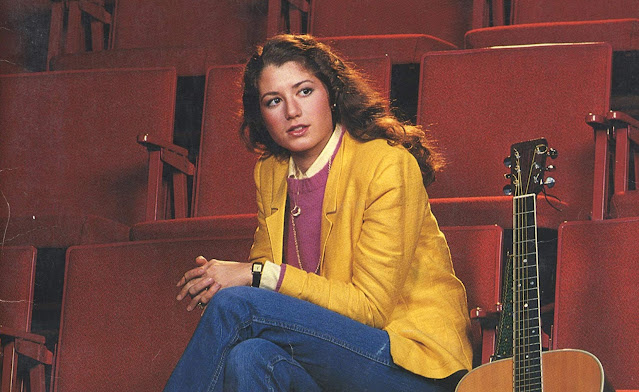 What hobbies do you have when you're not making music?

I go through what I call cereal passions, where I'll just get eaten up with something that I love and invest myself in it 100%, and then after a little bit of time I will jump to something else. To me, that's just a fun way to enjoy what you love. I love anything outside, the heat doesn't bother me - I love to sweat. Before this interview, I was in my garden out back picking okra that was, no kidding, bigger than my hand. I love nature. Later on today I'm going out with one of my daughters - we're going to ride horses, and I am not a fancy horseback rider. We just trail ride. I like camping. I also enjoy cooking, but I'm very average. I also love to read.

I couldn't sleep in the middle of the night last night, so I went and tuned up my bike. I knew that if I got on a computer that I'd never go back to sleep, so I thought I'd do that just in case I had a chance to go ride... and I don't ride like Lance Armstrong. Bottom line, I'd rather be outdoors than in a shopping mall any day of the week.

What books are you currently reading?

Well, this is going to sound really like the "spiritual girl", but I've never read the Bible cover-to-cover, so I'm trying to do that by my birthday. I also love fiction. This last year I've enjoyed Olive Kitteridge.

Do you have any phobias?

Bridges. I can hardly bike over a bridge - the older, the scarier. I don't know why, but they just make me nearly hyperventilate. I was in California with a couple of my daughters for a cousin's wedding in June, and my 17-year-old pulled over on the side of this bridge that went near Santa Barbara and over a canyon and she said, "Get in the driver's seat. I don't care how slow you go, but you've got to face this fear." I was sweating from every pore. I don't know why. That's the only phobia I can think of. 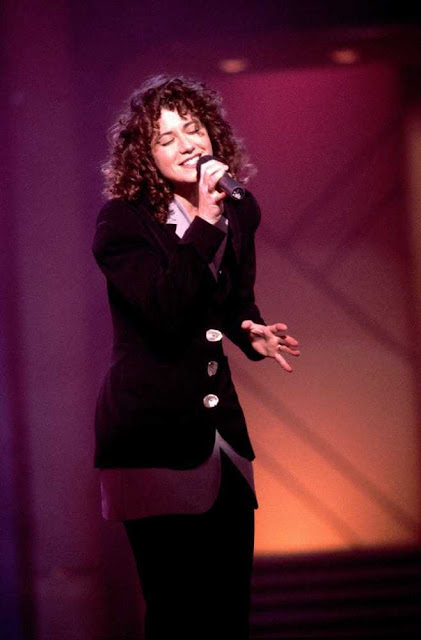 Do you collect anything?

I used to collect quilts, but now I have more than I need. I used to collect teapots after I went to Southeast Asia. I also used to collect dishes, but I collected more than I could use and started giving them away. When I was little, I collected seashells - I still do. I have the same seashell collection that I've had since I was kid, and still add to it. After a while, you go through so much stuff. What I love is using something until it's all worn out. I don't shop very much, and any great clothes I get is probably because it was for a photo shoot.

I invite people that are a part of my fan club to come to sound checks. I think it's more interesting than waiting in a line to get the same autograph for the twelfth time, and I can sing songs that maybe I wouldn't do in a show, or work out new stuff. People will come up to have me sign a picture from the last time and I will be wearing the same t-shirt. My whole family is that way.

Do you remember the first album that you bought?

The first album I probably bought was John Denver. I think I was the only John Denver fan in my family. I inherited The Beatles, Elvis, Joni Mitchell, Emerson, Lake & Palmer, and Jethro Tull. I had a great record collection when I was young because of my sisters.

Do you have a top three favorite records of all time?

My brain really doesn't work that way. I can say three records that I love, but tomorrow I'd have a different answer. 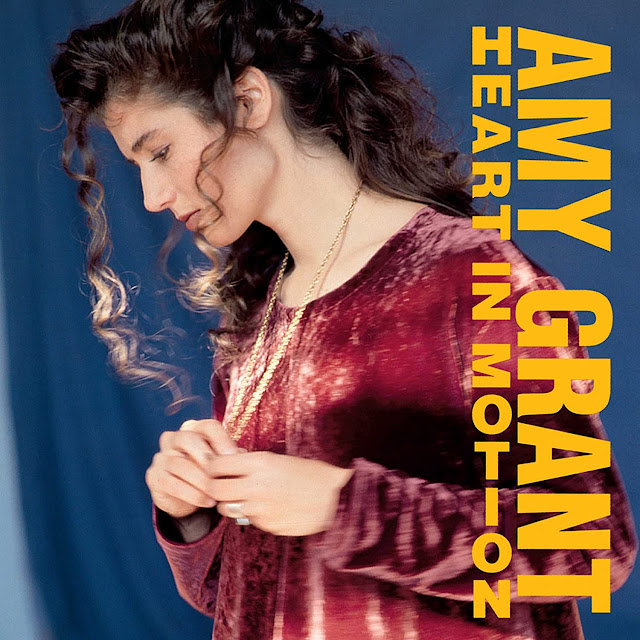 Are there specific albums that influenced you to start making your own music?

Joni Mitchell's Blue and Carole King's Rhymes & Reasons. Those records were a daily part of my existence in my little yellow bedroom with my first turntable. Also, The Jackson 5. I love Michael Jackson. I also love Aretha Franklin. The great thing about music is that, on any given day, it depends on how you're wanting to be moved. Something that is so perfect in one moment for you could make you want to jump and shout and feel so alive, and later can be something that is so interior and still. There are no three best records. They're all important - the famous, the infamous, and the unknown... because you never know how you're going to be moved.

What do you love most about making music for a living?

I would be making music whether or not I could pay the bills with it. I love it. I am just as happy to be onstage as I am to be in a crowd, just as long as somebody's making music. I was so fortunate to get the breaks that I got and for the doors that opened. I always exposed myself to, and was surrounded by, people who were talented in different ways who - in my opinion - were much more talented than I was. I did what I did because the doors opened up. Whether it is listening to records or playing guitar in my bedroom, I just love how music brings people together. I love the community that music creates, because it's equally shared ideas. Nobody is more important than anybody else.

That's what makes Nashville such a unique town. So much of it is based on creativity that you just can't hammer down and fly through the schedule. In order to be creative, you have to slow down. You have to ponder. You have to think. You have to reflect and articulate. You have to turn off your computer and cell phone and think of something that matters, and say it in a way that's interesting. To be able to do that is a gift. 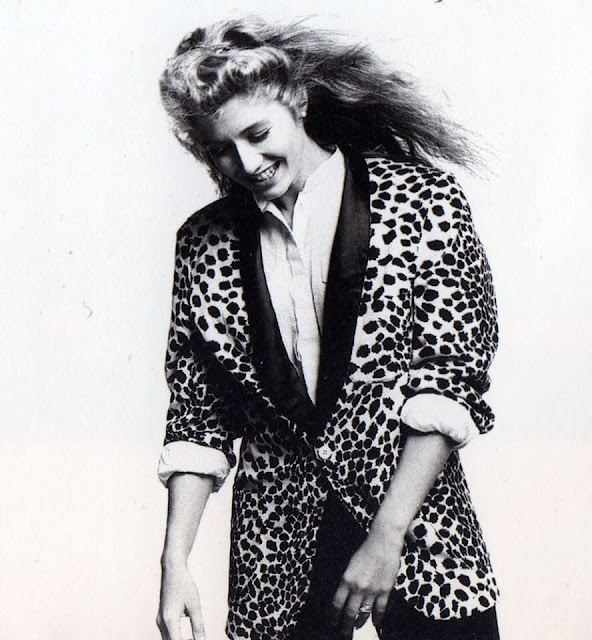 Which three adjectives would you use to describe yourself?

If you knew that this was going to be your last interview, what would be the most important message you would want to get across to people?

Life goes by faster the longer that you live, and it's such an amazing journey. The hardest parts are the most valuable, even though you hate every second of them. I tell my children that if, and when, you sense God... always open up.